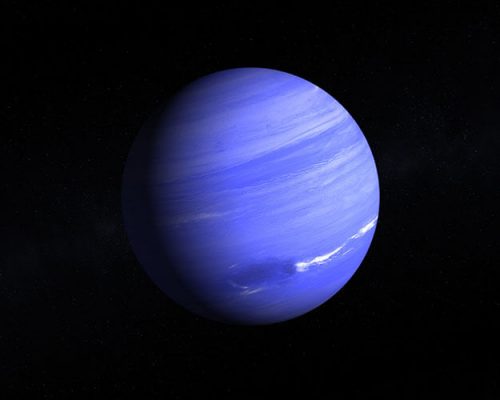 Neptune Through A Telescope

Neptune through a telescope or binoculars is the only way you’ll view the planet because it’s no brighter than magnitude 7.6. Humans are only capable of seeing objects as faint as magnitude 6.5. So, without a viewing aid, Neptune will remain hidden.

The calculations that go into determining the brightness magnitude are complicated. Still, the higher the number, the less bright they appear from Earth, and once you get past magnitude 6.5, you cannot see the object with the naked eye.

Neptune is one of the two ice giant planets, Uranus being the other one. If you know what Neptune looks like, you’ve observed the planet previously; then you’ll only need star charts to find Neptune again.

Should you be trying to observe Neptune for the first time, then knowing something of the history of the planet’s discovery will be helpful.

Discovery Of Neptune And Uranus

While the article is regarding Neptune, without the discovery of Uranus, we might not have discovered Neptune, at least not when the astronomer made the discovery initially.

William Herschel, an English amateur astronomer, discovered Uranus in 1781; however, he assumed it was a comet. Other astronomers of the time thought it was a star, mainly because their equipment wasn’t as sophisticated as Herschel’s homemade reflector telescope.

However, the object could be seen moving over time, and mathematicians could plot the “star’s” orbit. They quickly discovered the rotation around the sun was circular, in the same way as all the other planets in our solar system. This planet, however, was further away from the sun than any other planet, yet it was exceptionally bright, which meant it was huge compared to Earth.

What Herschel had discovered was Uranus. This was an astounding discovery because scientists believed only five other planets were orbiting the sun for as long as humans had viewed the night sky.

In the 1840s, Urban Jean Joseph Le Verrier predicted where Neptune (as the planet was later called) would be found. Astronomers were aware that Uranus didn’t logically move in the night sky, and even considering the Sun’s gravitational pull, something was not right.

His calculations were so accurate that astronomers J.G Galle and H.L. d’Arrest found the planet within one degree of where Le Verrier predicted.

Most Frequently Asked Questions About Neptune

People see Neptune as a blue planet similar to Earth, and most likely why astronomers decided to call it Neptune, after the mythical sea god.

However, the planet isn’t blue because it has oceans; the upper atmosphere is hydrogen and helium with some methane. The gas absorbs the sun’s red light and reflects blue light into space, which is why the planet appears as a blue disc when you view Neptune through a telescope.

Even though Neptune and Uranus are both “ice giants,” Uranus is a blue-green color compared to Neptune’s brighter blue. Both planets have methane in the atmosphere, so the supposition is there must be some unknown element in Neptune’s atmosphere, which is not present in the atmosphere of Uranus.

Neptune’s gas atmosphere is one of the coldest temperatures found anywhere in our solar system at minus 220 degrees Centigrade which is,  minus 364 degrees Fahrenheit.

Astronomers believe the winds blowing across the surface of Neptune reach speeds of over 2,000 Km/hour, which is 1,240 miles per hour.

With winds blowing at those speeds, no spacecraft would be capable of a safe landing, and even if it were possible, you would need to go deep inside Neptune to find any solid rock or surface.

In addition, the temperature at that depth would be thousands of degrees, more than required to melt rock. So even if a human could get there, the immense heat and atmospheric weight would soon extinguish life. So, no, it would be impossible to stand on the surface of Neptune.

Neptune is approximately 2.8 billion miles (4.5 billion kilometers) from the sun and is the most distant planet.

You can see the other ice giant, Uranus, if you know where to look, and it’s a very dark night with your naked eye. However, Neptune is about seven times dimmer, so you will need a telescope to see Neptune, or at the very least a pair of binoculars.

Neptune is on average 2.8 billion miles or 4.5 billion Kilometers from the sun, and it will take 4 hours and 34 seconds for light from the sun to reach Neptune.

Neptune is gigantic and the fourth-largest planet in our solar system; however, it’s so far from the sun it takes a languid 165 years to orbit the sun one time. Because Pluto was reclassified as a dwarf planet, Neptune is now the outermost planet of the solar system. and the eighth from the sun.

The position of Earth and Neptune in their respective orbits would be one factor to consider. The other would be the speed of the spacecraft.

One excellent example is the Voyager 2 spacecraft. NASA launched the craft on August 20, 1977, and it took twelve years before it could reach Neptune, finally arriving on August 24, 1989. Voyager 2 is traveling at over 35,000 miles per hour.

How To Find Neptune?

Typically the best time to view planets is because they are at their brightest, in opposition. Unfortunately, Neptune is never actually bright. Opposition means the Earth is between Neptune and the sun, which positions Neptune 180 degrees from the sun.

Neptune is roughly five times dimmer than the least bright star you’ll see under the darkest sky on a moonless night; so, the bottom line is the planet isn’t easy to find. You’ll need a telescope and a detailed chart.

Even with a telescope, Neptune looks more like a faint star than a planet. To begin with, you’ll need at least 4 inches of aperture and 200x magnification to view Neptune as a small disk.

You will always find Neptune when Pisces and Aquarius are visible because Neptune will always be in proximity. Look for the two bright stars Hydor and Phi Aquarii in Aquarius. If you could picture a line from Hydor to Phi Aquarii, that line would point the way to Neptune.

Even viewing Neptune through an 8-inch telescope with high magnification, you’ll only be able to distinguish a disc that’s a shade of blue. But at least you’ll know you’re looking at a planet. However, it’s still not possible to make out any of the planet’s surface features.

What About Neptune’s Moons?

Neptune has 14 moons, one of which is a well-known moon called Triton; undoubtedly, you’ve heard of this moon. Triton is a little smaller than our moon, with a diameter of 1,680 miles.

You might not know that Triton orbits Neptune against the planet’s spin, a retrograde orbit.

Orbiting this way is highly unusual; in fact, Triton is the only moon to do this in our solar system.

Sadly, you will be unable to see the moon with an amateur telescope because it’s out of range and shines below magnitude 13.

Neptune is the windiest planet in the entire solar system. Blowing clouds of frozen methane at speeds in excess of 1,200 miles per hour, it’s an unbelievable hostile environment; those windspeeds are reaching almost the equivalent of twice the speed of sound on Earth.

The Voyager spacecraft sent pictures back to Earth showing what has been called the “Great Dark Spot.” This is a raging storm the size of Earth on the planet’s surface. Unusually the storm moved towards the equator after forming, but instead of dissipating, as usual, it turned around and went back towards the pole.

Because Neptune rotates faster than Earth, one day on Earth is longer than a day on Neptune. Days on Neptune lasts about sixteen of our hours.

Neptune can sometimes be further from the sun than Pluto. Because of Pluto’s elliptical orbit, it crosses paths with Neptune and becomes closer to the sun.