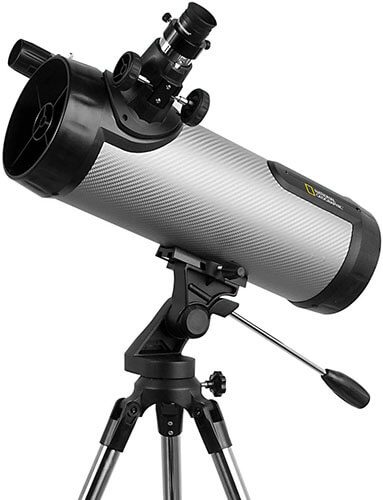 His main reason for creating the reflector telescope was to avoid the chromatic aberrations (a lens cannot focus all colors on a single point) occurring in refractor telescopes.

Should you be reading this review because you’re on the lookout for a starter telescope for your child, then you can’t go far wrong with the National Geographic NT114CF.

It’s low price, and the carbon fiber body makes it lightweight and easy for kids to deal with—basically an ideal choice for kids and beginners looking for their first telescope.

The NT114CF has an advantage, and that’s the carbon-fiber tube. The reason is the weight reduction. If the scope is lightweight, it doesn’t require a heavy, sturdy tripod for mounting the tube.

Looking through bigger and heavier tubes plus their correspondingly heavier tripods can increase vibrations while you’re viewing. A much lighter tube and setup reduce the amount and severity of vibrations.

A lower price telescope having a carbon-fiber tube rather than an aluminum tube should be seen as an advantage. Here’s the reason: before you engage in stargazing, you need to ensure your telescope corresponds to the temperature where you’re using the scope.

If you don’t allow the tube to cool sufficiently, you will see image distortions and focusing problems because of heat rising inside the tube.

Aluminum takes more time to cool down and doesn’t react as well to temperature fluctuations as carbon-fiber.

Setting Up The NT114CF Telescope

Another excellent reason for beginners to purchase this telescope is that it arrives almost totally assembled, making it dead easy for you to get a start on your viewing quickly.

But we said almost assembled, so there are a few things that still require setting up. The first job after receiving the package and emptying the box is setting up the tripod.

Pull open the tripod legs until the spreader bars lock. The spreader bars on a tripod prevent the legs from splaying out too far and allowing the whole setup to sink to the ground. They also help with stability. Remove the accessory tray from the box and fix it to the spread bar.

Later, the accessory tray will be an excellent place to pop your eyepieces and Barlow lens when you’re viewing.

Remove the metal mount head from the packaging. You’ll find a bolt on the bottom of the mount, take it out so you can place the mount onto the tripod. Replace the bolt and tighten it, so it’s secure.

A handle controls the mount’s movements and serves as a lock for the altitude swivel; this requires threading into the mount. The azimuth locking knob is also on the mount head.

Newtonian reflectors require collimation, and this is one reason why beginners shy away from these telescopes. Collimation is simply the aligning of the primary and secondary mirrors to obtain perfect imaging.

In modern telescopes, the collimation is done at the factory. Sometimes during transit, the collimation can be affected, and then the telescope will need collimating. Even then, there are numerous articles online showing how you can accomplish this.

High power magnification is best for the moon and if you’re looking at planets. For deep-sky objects, you need to use lower-powered eyepieces; they will give you a wider field of view.

What Will You See Through The NT114CF?

Many people who take up astronomy hope to see those fantastic deep sky images we all see on TV. These incredible images do not come from a low-cost beginner telescope such as the NT114CF. However, you will see bright objects such as the Andromeda galaxy, the Pleiades, and the Orion nebula.

It’s also possible to view Saturn with the rings, Jupiter, and some moons, but the other planest will only be distant dots.

The moon will be your best bet. You can see the moon’s craters and the terrain, and it is where you’ll see the most benefit from purchasing the NT114CF.

Is The National Geographic NT114CF Telescope A Good Purchase?

During this National Geographic NT114CF review, we have spoken about this telescope’s quality, accessories, how to set up the telescope, and what is possible to view with the scope. But is it an excellent telescope to purchase for children and beginners?

From a price point of view, and considering the NT114CF is a Newtonian reflector with a 114mm aperture, which is a nice size, it’s an ideal first telescope, undoubtedly. The ease with which anyone can set it up, the lightweight carbon-fiber tube, and the accessories that come with it all make this a very entertaining and useful tool for children and beginners.